The Great Debate: Going to the Theater vs. Watching at Home

This debate comes up quite a bit whenever I mention watching more movies at home than at the theater. Just for the record, I love seeing a movie on the big screen, in my opinion that was the way movies were meant to be watched but past theatrical experiences have ruined it for me. It really comes down to three factors: Cost, convenience, and the atmosphere. One more to add, I wrote this without mentioning the quality of the movie itself being played (incorrect aspect ratio, crackling sound, specks of dust on the lens, etc.)

Cost, most likely a subject that affects everyone reading this whether you want to admit it or not. My local multiplex charges $8.50 per ticket. I rarely ever go to the movies by myself so that's $17.00 just to get in. Then there's the soda and popcorn, which I can skip (and rightfully do so) but for comparison we'll add in another $15 for two medium drinks and a bucket of popcorn. Our grand total: $32.00 for one movie night!

Now, let's say we rent a new release from Redbox, because well that's our only alternative since all our video stores closed up shop years ago. $1.50 for a Blu-ray, which is higher than most movies released today is worth in my opinion. A bag of microwavable popcorn for $0.25 (including extra real butter) and a can of not watered down Pepsi for another $0.25. Grand total for two: $2.50! We could rent 12 movies for the price of one at the multiplex. 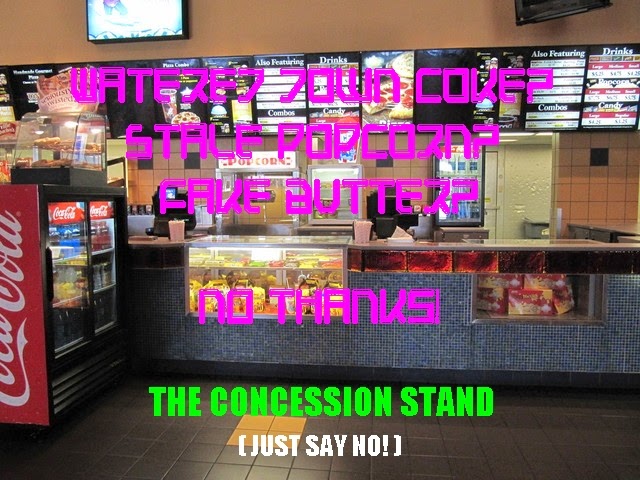 Convenience, another complaint I've heard a lot of. When you go to the theater you are on a time constraint. Movies are shown at 7:00 or 7:15, are you going to make it 10 or 20 minutes earlier to secure a good seat? If you have a busy work schedule, you better not plan to meet at the movies on a work night.And what happens if you plan for a movie night but 7:00 rolls around and you find yourself too tired or uninterested in the movie you bought a ticket for?

On the other hand, if you rent, most video stores I've been to are open until 10pm or later during the week and midnight or later on the weekends (Friday night included) and Redbox assuming it's an outside location is open 24 hours a day, so you can enjoy the movie any time of the day or night.

Atmosphere, here's another one people complain about the most but yet they suffer through it anyway.  Some theaters show pride in their establishments and I tip my hat to them, but most of your larger chain multiplexes couldn't care less about your movie-going experience once you buy the ticket. At my local multiplex, the floors are always sticky, the seats are as hard as a rock, there's always some unruly child kicking my seat, an abnormally tall man will always sit in front of me, and that creepy/smelly man that takes the seat right behind/in front of/next to me that will spend the next two hours hovering over the seat in front of him...guess who's in the line of the draft? Yup, me. At any given time during the movie, some idiot missed the sign at the door that says "Turn cell phones off" as their phone rings, or they're sitting in the theater texting/talking on it. Believe it or not, some people go to the theater to watch the movie, I've seen groups of rude patrons(usually teenagers) sitting up front talking to one another like there's nothing on the screen in front of them. Complaints to management gets no response, yelling down to them to shut up gets everyone to turn to you and say "Shhh!" If you go to the theater today, wear a haz-mat suit you'll need it! Heaven forbid I find out what someone did in the seat I'm sitting in before I got there.

Not much of an argument to all of that, when it comes to watching a movie at home. Your home is only as messy as you make it, you can turn off your phones and disconnect your router so you and whoever else you are with aren't tempted to use them during the duration of your movie, and in the comfort of your own home you can be comfortable-put your feet up and relax if you want to. You pay a royalty for a sub-par movie experience when you could be frugal and get a much better experience at home (even on a small screen).


As much as I love seeing a movie on the big screen my comparisons may be a little biased since nearly every movie I watch is rented or owned. I don't visit the theater too often anymore, and when I go I've scoped out an awesome second-run and first-run drive-in theater that operated with pride and I no longer have to worry about those rude people, high ticket and concession prices, or watered down cokes.

Whether you agree or disagree, post your comments below - I look forward to reading them and hey, you may even find a response! :)
at June 17, 2014
Email ThisBlogThis!Share to TwitterShare to FacebookShare to Pinterest
Labels: Miscellaneous