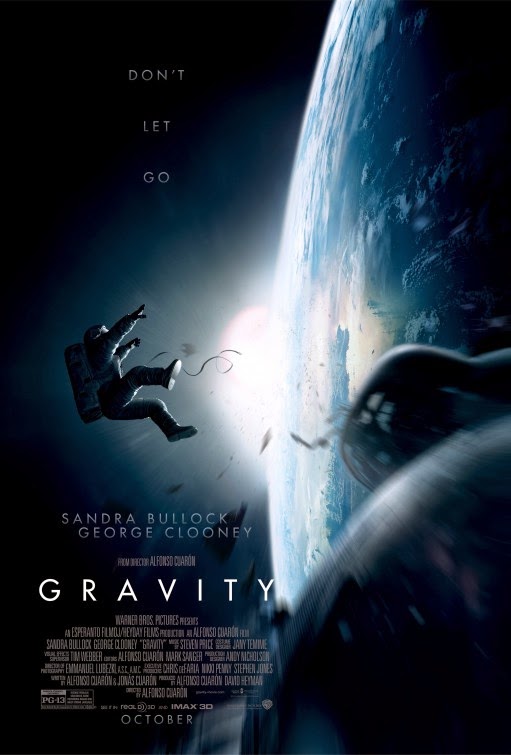 Synopsis:
A medical engineer and an astronaut must work together to rebuild a space station when a missile strike sends meteors shooting through space, which ends up damaging their shuttle and makes them drift through orbit.

I was determined to see this movie after watching the Oscars this year, it was just a matter of time before it reached Redbox and was in-stock when I  was in the mood to watch it. It did have some great visual effects, but the story was completely non-existent. If you want a scientific thriller, this isn't the one to see. It tried so hard to be the next Apollo 13, but it lacked the dramatic realism and outstanding acting that Ron Howard's movie had.
We meet Dr Ryan Stone (Sandra Bullock), an medical engineer who's working away from her hospital basement job and is now in space. Her acting is by far the worst I have seen. She recently lost her young child and is still grieving, that's understandable for anyone who lost a child or sibling at such a young age, but to give up living because of it? That's likely not what her child would have wanted. One more thing, the laws of physics - we get it, there's no gravity in space so why did she tumble downward so fast in this movie?

At the beginning, for likely no more than thirty minutes we see Matt Kowalski (George Clooney), an relaxed astronaut also up in space with Dr Stone. Clooney's role made this a little more interesting, which came to no surprise to me as I tend to enjoy his movies a little - Up in the Air, The Peacemaker, among others. I only hoped he would've got more screen time than he did, like every movie she's been in Bullock stole all the attention in this one.

The plot twist, was completely unbelievable. We see Dr Stone sitting in the Chinese space shuttle out of her space suit when someone-we can't tell right away who it is-bangs on the window and quickly opens the door and comes in. We immediately find out it was all in her head. For starters with the lack of air there wouldn't be a chance for her to live with the shuttle opened, also with the zero gravity  I would doubt Kowalski would've survived floating around space after the initial 90 minute attack following the first meteor shower following the missile attack.  Furthermore, the rushed ending...No doubt was it unrealistic as Dr Stone lands the shuttle in an ocean and gets out of it in one piece without any prior experience in landing one.
Consensus: This movie had some great visual effects and cinematography which was expected after watching the Oscars, but the story behind this movie was stale and worthless. Not worth the hour and a half runtime
Would I recommend this movie? No
Favorite quote: "It was one hell of a ride!" -Dr. Ryan Stone (Sandra Bullock)