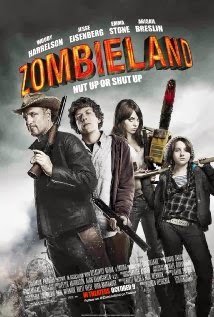 
The Movie:
During a zombie apocalypse, there are only four survivors, all nicknamed of the city they are from. There's Columbus (Jesse Eisenberg), a shy college student in Texas who's obsessed with his 30 rules such as: "look in the back seat," "double-tap," "avoid public restrooms." There's the good-old boy from Florida, on the road to kill some zombies and hunt down a Twinkie, Tallahassee (Woody Harrelson). The two soon approach a girl, Wichita (Emma Stone), and her sister Little Rock (Abigail Breslin) who are both on their way to a Los Angeles amusement park that they've heard is zombie-free.

Review:
Having disliked most of what comprises of Jesse Eisenberg's filmography, I was a little hesitant to watch Zombieland. However, reading that it also stars Woody Harrelson who is well-known from the TV-series "Cheers" and the gorgeous Emma Stone I decided to give it a shot anyway. I'm so glad I did, this movie has opened my interest for other zombie-related films like Night of the Living Dead for instance.

This movie starts out in a town in Texas, where Eisenberg can be found in his college dorm room playing World of Warcraft (did people really still play this game in 2009?) when his neighbor, 406 (Amber Heard) frantically knocks on his door. He has had a crush on her since he first saw her, but due to his anti-social behavior and special rules he never made a move and now he finds out it's too late. 406 was his first encounter with zombies. The rules he has include common sense things like "Always wear your seat belt" down to ridiculous statements like "Never use a public bathroom"  After his encounter with 406, he packs up and decides to head home, to Columbus Ohio to see if his family is still alive, when he comes across a zombie hunter and Twinkie fan from Tallahassee Florida (Woody Harrelson). Along the way, at a grocery store stop in search of Twinkies they come across two con-artist sisters out to survive on their own with trust issues, there's Wichita (Emma Stone) and Little Rock (Abigail Breslin), both on their way to Pacific Playland in Los Angeles, CA, where they suspect is zombie-free.  Against all odds, they form a group and head to California together. Once they arrive in LA, the first stop they decide to make is the legendary Bill Murray's estate. While the rest of the town was turned undead, Bill (played by himself) dressed and acted as a zombie to fit in. His acting may be too good, since he tried spooking Columbus and ended up being shot and killed with a double barrel shotgun. The next day, the group splits up again, as the girls head to the amusement park only to find it's not as zombie-free as they had hoped for. Getting trapped on a ride, they must now do what they've never done before, and rely on the guys to help them.

This movie had it's flaws and wasn't by far a serious movie to watch, but it'll make for an enjoyable Friday night with a bowl of popcorn. My opinion for Jesse Eisenberg didn't change after viewing this, I still don't like his 'type' of acting but I will probably give a couple of other movies he starred in a chance.

Favorite quote: "Believe it or not, Twinkies do have an expiration date." - Tallahassee, Woody Harrelson