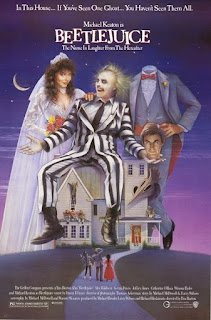 The Movie:
After a deadly accident, the Maitlands (Alec Baldwin & Geena Davis) find themselves stuck inside their house. Confused on what happened, they now face a bigger problem...The strange, new family that's moving in! After many failed attempts to convince them to leave, they find themselves hiring the services of a bio-exorcist.

Review:
Only Burton can pull off probably the best horror comedy classic in the last 25 years! And of course he couldn't have done it without the infamous Michael Keaton  playing the lead role. Choosing an additional strong cast to pull off the recently deceased was no easy task I'm sure, but I feel Baldwin and Davis did a fantastic job with their roles.

Beetle Juice is a classic horror movie that explores life after death. The Maitlands (Baldwin & Davis) decide to spend their two-week vacation in their New England home. Upon returning from a trip to town, Barbara (Geena Davis) swerves to avoid hitting a dog in the road and crashes through the side of a covered bridge and plunges into the river beneath it. As they return home in spirit form, and quickly come to the conclusion that they are dead. They are in peace until a family from New York City buys their home and moves in, the father Charles Deetz and the dark daughter Lydia (Winona Ryder) are also looking for peace and tranquility but unfortunately his wife is indifferent on the current decor and insists on changing it, with help from family friend Otho (Glenn Shadix). The Maitlands are invisible to the the entire Deetz family except Lydia, who later befriends them. Against the advice of their caseworker Juno (Sylvia Sidney), they hire the free lance bio-exorcist, Betelgeuse (Michael Keaton) who was formerly a trouble maker in his life.

I can't stress it enough, Beetle Juice is near perfect movie and a classic to watch this time of the year. It may take a couple viewings but you will love it.