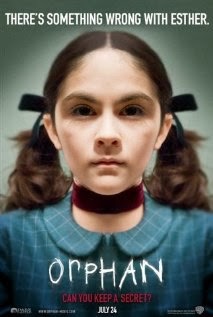 The Movie:
The last year has been troubling for Kate (Vera Farmiga) and John (Peter Sarsgaard) after the loss of their baby. Kate quickly turned to alcohol shortly thereafter. Since her daughter Max (Aryana Engineer) nearly died after falling through thin ice, while Kate was inside drinking instead of watching her, Kate decided to seek out therapy and is now doing better. The couple decide to adopt a child to fill the void in their lives. While at the orphanage, they meet and fall in love with the secluded, nine-year old Russian girl, Esther (Isabelle Fuhrman). Eventually, Kate quickly realizes her family has been a mess since Esther came into their lives, feels like Esther is manipulative, and starts seeking out her past history to the surprise of John who refuses to believe anything is wrong.

Review:
Interesting, dark, disturbing, twisted, and intense - just a few words to sum up my thoughts on "Orphan". This thriller is definitely the most interesting I've seen in a couple years, its' not like other thrillers involving a family. The twist in the plot, being when we find out Esther is really a near-40 year old woman with growth hormone disorder making it possible to look like a nine year old girl.

Usually child actors are painful to watch, but 12- year-old Isabelle Fuhrman gives a terrifying, chilling performance that is worthy of praise. Aryana Engineer debuts as the deaf little sister, Max is adorable and steals the life of the movie in almost every scene she's found in. Jimmy Bennett, who plays Daniel, the brother, portrays a middle child who's jealous of not being the center of attention and torments his siblings. The intensity of Esther getting the little sister involved in her murders, and threatening Daniel in the middle of the night will send shivers down your spine, a perfect combination to a great thriller.


Although this may be the greatest thriller of the decade, it's psychological terror is not recommended for children or the weak at heart. The basic idea is nothing new, but if you're looking for a horror movie without any cheap scares this one will keep you on the edge of your seat. The extremely well done performances by the child actors is enough of a reason to at least give this one a rent.