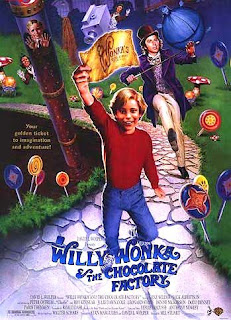 
The Movie:
Join the expedition visiting legendary Candy Man Willy Wonka (Gene Wilder) in a splendiferous movie that wondrously brings to the screen the endlessly appetizing delights of Roald Dahl's classic book. Coated with flavorful tunes and production design that constantly dazzles the eye, this effervescent musical never fails to enchant young and old. On a whirlwind tour of Willy's incredible, edible realm of chocolate waterfalls, elfish Oompa-Loompas and industrial-sized confections, a boy named Charlie (Peter Ostrum) will discover the sweetest secret of all: a generous, loving heart. And you'll rediscover the timeless magic of a delicious family classic.

Review:
I'm one of the many, who always preferred 1971's Willy Wonka & the Chocolate Factory to Tim Burton's better adaptation of Dahl's book. Sure, Charlie and the Chocolate Factory may have had it's moments, but one thing it didn't have, is Gene Wilder, who gave an ingenius performance as the odd title character.

Day after day, Charlie walks by the Chocolate Factory on his way home from school, which despite being closed for decades, has somehow still been mass-producing chocolate. Charlie's Grandpa Joe (Jack Albertson) says, the owner Willy Wonka grew tired of his competitors trying to steal his top-secret candy recipes so he fired all his employees and refused to let anyone see his operation. But that's about to change.

One day, Willy Wonka announces that he has hidden five golden tickets inside his world-famous Wonka chocolate bars, and whomever finds them will be invited to his factory for a grand tour. The first four tickets are found by Augustus, a German kid who loves to eat; Violet, a wise-cracking pre-teen who's addicted to chewing gum; spoiled brat Veruca Salt, whose father bought cases of Wonka bars to find her a ticket; and Mike Teevee, who rarely looks up from his family's TV set. Of course the one person who wants to find a ticket more than anyone else, and perhaps in my biased opinion deserves it more, Charlie winds up finding the fifth and last ticket. Accompanied by his Grandpa Joe, they join the others as they make history, being the first people allowed inside the chocolate factory in many years.

And what a magical place it is! From a chocolate river to geese that lay golden eggs, the kids find out the factory is run by little people called Oompa-Loompas, complete with orange skin and green hair. During the tour, as expected, the kids get into a fair bit of trouble. From falling into the chocolate and being sucked up by a giant vacuum tube, falling into a garbage chute, and even one blowing up like a balloon to require being "juiced" back to normal size.

All tied together by the in-genius of Gene Wilder himself, there's a fair bit of subtle sarcasm found in everything he says which puts him in a position of utter madness or seriousness. Again, in my opinion, there's no one who could interpret Willy Wonka better than Wilder himself.