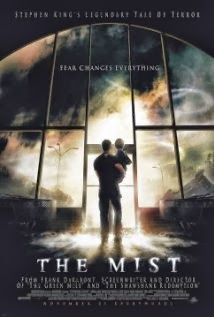 The Movie:
After a severe thunder storm, David Brayton (Thomas Jane), his son Billy (Nathan Gamble) and neighbor Brent Norman (Andre Braugher) drive into the supermarket in the small town of Maine. Along the way, they notice a strange mist covering most of the lake, and military vehicles going towards it, but not thinking much of it, they continue onto the store. While shopping, the inevitable happens, an older gentleman comes running into the store with a bloody nose, declaring "there's something in the mist!" This creates a panic among the eighty-some shoppers in the store, one specifically being a woman known for spreading her crazy religious beliefs across the town.

Review:
This has to be the first true horror movie I've seen in decades. This one doesn't need cheap frights to be scary, it's a down to earth scary movie. It was shown that the storm must have unleashed something evil that would get you if you went into the fog. A mixture of some horror and science fiction, as the secret "arrowhead project" created at a nearby military installation that they thought would open a proverbial door to the outside world.

The one peeve I had was the religious nut job that thought sacrificing non-believers would save the lives of all the believers. Don't get me wrong, I understand why she was included in the script and find it gave the film more meaning but I was ready to jump through the screen and beat the crap out of her by the midpoint. The audience at my recent movie night showing of this, all applauded when former schoolteacher (Frances Sternhagen) threw the can of peas at her during one of her speeches.

The ending showed the small group of people who just wanted to escape the mist, finally make it out of the supermarket and into David's truck. Taking a quick detour past his house, and seeing his wife not able to escape the group of five proceeded out of the town to however far a tank of gas took them. Unfortunately they hadn't made it far before running out of gas, but at least they tried. This is where the shock comes into play, they were minutes away from being rescued by the military when David decided to pull out the 6-round, although only four bullets remained, revolver and kill all five passengers including his young son. Being out of bullets he was frustrated on what to do, and vouched to get out of the truck and call for the "things" in the mist to take him. The credits start rolling as David is down on his knees crying, begging to be taken while trucks loaded with victims were being driven out of the contaminated area. It's surely the most shocking ending I've ever seen.