Every Dog Should Have a Boy 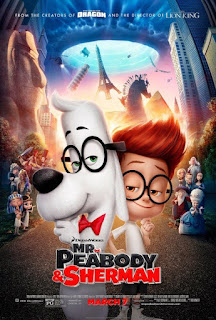 We could all learn a thing or two from our dogs. Things like how to greet others by sniffing butts, where to relieve ourselves on that bright red space ship on the curb, oh and using a time machine to learn about historical events first hand... Wait, what?

Dreamworks brings us yet another animated feature based on a childhood cartoon, Mr. Peabody & Sherman (2014). In case you're living under a rock or otherwise can't figure it out, Mr. Peabody (voiced by Ty Burrell) is the dog decked out in big framed glasses and bright red bow tie. He's unlike your ordinary dog in the sense that he walks on his hind legs, and has an IQ of a gazillion +1. As a pup, he knew he was different than his brothers and sisters at the pound, rather than fetch a stick he chose to do math problems and make science experiments. One day upon walking down the street alone, he stumbled upon a crying basket sitting in an alley, inside the basket as one would guess was a baby similar to his physique. That day forward, Mr Peabody knew he had to take him in, naming him Sherman (voiced by Max Charles) and proving to a judge that he could be a parent.


On the first day of school, the slightly geeky Sherman found himself bullied by a girl named Penny (voiced by Ariel Winter). When she stole his dog whistle, he retaliated by biting her. This resulted in a visit to the principal's office for Mr Peabody, as well as a threat from the indifferent child services representative Ms. Grunion (voiced by Allison Janney). Upon trying to show Ms Grunion he is a fit parent, Mr. Peabody decides to host Penny and her family for dinner on the same night Ms Grunion comes over to continue her investigation.

Everyone knows when you tell your child not to do something, they're going to try to do it anyway. For Sherman and Penny, it's using the Wayback machine even after Mr Peabody distinctly tells them not to. When Sherman uses the machine to prove to Penny that he truly saw and spoke with George Washington, she decides to use the machine as a toy rather than a tool and goes back to ancient Egypt. Upon rescuing her from nearly being married to king Tut and mummified, the Wayback machine malfunctions and lands them in France around the time Leonardo da Vinci (Stanley Tucci) painted the Mona Lisa. Following the repair of the Wayback they get into a panic and drops into The Trojan War, in ancient Greece.

This movie was filled with emotions and conflicts. The time travel, like any other movie can get a little hectic and may be off a tad, but if you just sit back and relax you will enjoy this flick. Let's face it, any movie regarding time travel will have it's plot holes, even masterpieces like Back to the Future.

In the end we see the relationship between Mr Peabody and Sherman mature. This is simply not only a "kids movie." Sherman and Penny grow closer together, so much that upon returning to present day they're the best of friends. Even the hideous Ms Grunion meets the man of her dreams, as she is pulled into the past by a Greek soldier. Needless to say, "Mr. Peabody and Sherman" is a beautiful, funny, and most importantly probably the most entertaining flick Dreamworks has produced since Shrek.