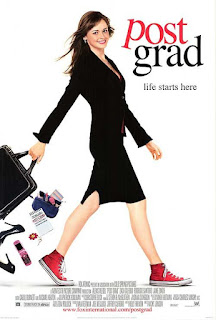 The Movie:
Ryden Malby (Alexis Bledel) has a master plan, Graduate college, get a great job, hang out with her best friend (Zach Gilford) and find the perfect guy. But her plan spins hilariously out of control when she's forced to move back home with her eccentric family. By the time she lands her dream job, Ryden realizes it's meaningless without the man of her dreams...and the people she loves.


Review:
I didn't go to college, but I know many who did. Many of whom, spent months even years after graduating unemployed or stuck in the fast food or retail industry which of course they hated. Rather than start life out with tens of thousands of dollars in debt, I decided to go out into the workforce right after high school - working up from a $7.50 minimum wage job to making over $50,000 annually. Maybe I was just luckier than most.

In this story, Ryden thinks she has her life all figured out - fresh out of college with an English degree, she assumes this guarantees her the job she has always dreamed of having, at a large reputable publishing firm. Unfortunately during an economic crisis, she's not the only one looking for work thus being one of a dozen also qualified candidates, including the class valedictorian who believes herself to be on top of the world.

The job is just her least concern at the moment, she also has relationship issues. Her best friend obviously likes her, while she notoriously keeps him in the 'friend zone' while she chases the older, European hunk next door. When she finally gets the job she's always wanted, her neighbor decides to move back to Europe and her best friend decides to move 5000 miles away to go to law school she realizes a good job isn't everything in life.

I'll be honest here, I'm a dude and I liked the show Gilmore Girls, it's over dramatic themed episodes were clearly not meant for everyone and I didn't always agree with what was going on or how the show ended after seven seasons but I never thought about turning it off and have watched it many times over since. That said, Alexis Bledel wasn't my favorite character - neither was Lauren Graham for that matter. Her acting was a over ambitious, like she was trying too hard to impress someone. It's obvious this carried over into her film castings. I'm not saying she's a bad actress, I enjoyed her roles in the budget film The Brass Teapot and especially Disney's Tuck Everlasting.

There are many similarities between Gilmore Girls and Post Grad, both we see a do-good teenager get into a prestigious college and think everything from there will automatically fall into place. Sure enough, in both cases, they actually do. The movie much like the sitcom was extremely superficial which makes for a undesirable viewing.  No reason to lie, the only reason I watched it in the first place was for Michael Keaton's involvement, and that's  saying a lot as it seems like lately he'll take any job offered even if it's bad.