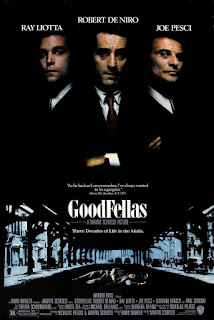 
Whether you want to accept it or not, organized crime actually exists, in many parts of the world. Goodfellas is based on a true story, explores the lives of gangsters in Brooklyn, chonicling the events of Henry Hill (Ray Liotta).

As he gets older, he marries and has children, but still continues his long-term relationship with the organized crime family run under mob boss Paulie (Paul Sorvino), and befriends a calm, steady gangster named Jimmy (Robert De Niro) and wild man Tommy (Joe Pesci).

This is surely one of the great films from the gangster film genre. Director Martin Scorsese fully shows this unromantic view on the gangsters lifestyle. He shows that the gangsters do is steal, kill, and don’t associate with many others outside of their family, which in all shows how these character interact with one-another. What Scorsese is mostly showing and telling that these people are scum, and this is so crushing in a beautiful and artful way.

So, which is better: Goodfellas or The Godfather? Of course they're both amazing films in their own right, and both are focused on organized crime, yet each of them give a totally different approach. I feel that The Godfather is focused more on the family-side of things while Goodfellas spends more time with its characters.