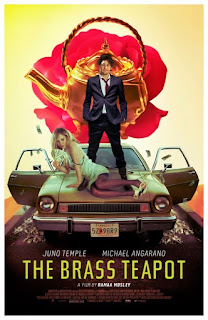 
I don't normally watch much TV, the excess of commercials bore me but every once in awhile I'll find myself channel-surfing and will stumble upon a hidden gem or two. The other day was no exception, I came across this as it was just starting on HBO and thought the summary sounded interesting enough and being on a premium movie channel meant one most important thing: No commercials.

The Brass Teapot (2012) is a movie about a high achiever who fell in love and later married a guy who had very few ambitions in life. Regardless of their financial woes, our lead character, Alice (Juno Temple) went to college but because she refuses to start at entry-level cannot get hired. Her husband, John (Michael Angarano) is a unsuccessful salesman. While driving down a seemingly desolate highway, they get hit by a large truck in front of a little antique store. Alice spots the owner, with an extraordinary looking teapot that she decides she must have so she finds her way inside.

Soon after arriving home with the teapot, she learns it's no ordinary teapot. Money flies out of this indestructible teapot whenever the person holding it gets hurt. The more pain, the larger the payout. One can only assume how the rest of the film goes, the once broke couple are now covered in cuts and bruises but are wealthier than they ever imagined they would be. This movie is an original story of greed, how can one be happy for beating the crap out of each another? The teapot, an imminent object, tears them apart physically and even emotionally.

I later found out this was an independent film, created on a low budget (est. $900,000), which would explain the rushed scenes and flopping storyline but not to say it wasn't enjoyable and the premise was original. The leading cast aren't well known names, Juno Temple and Michael Angarano but they both do a superb job, which sent me looking for the rest of their filmography.

Finally, the consensus is this film won't win any academy awards but that doesn't mean it's not worth checking out if you ever come across it.